From Obsidian Scheduler
Jump to navigationJump to search

Any number of jobs can be configured to not run concurrently, even if scheduled to run at the same time. When jobs are set as conflicting and are scheduled to run at the same time, the chosen prioritization will determine the order of execution of the scheduled jobs. Any termination state, either success or failure, will release the next lower priority job to complete. These conflicts work even across multiple hosts.

If a job which isn't using the Conflicted recovery type cannot be executed within its Pickup Buffer, it will be marked as Conflict Missed, though it can be resubmitted later if desired. When you configure job conflicts, you will want to choose Recovery settings carefully (Recovery Type and Pickup Buffer).

When using Recovery Types other than Conflicted, in the event of a conflict, if the waiting lower-priority job cannot be picked up and started within the configured number of Pickup Buffer Minutes past the original scheduled time, the scheduled job will be marked as Conflict Missed and will not be run.

As of Obsidian 2.9.0, a job can be put into multiple conflict groups, each having their own separate priority ordering.

When selecting available non-conflicted jobs to run, Obsidian inspects the conflict groups in the order provided when they are saved (from left to right in the user interface), and selects the highest priority available job before moving onto the next conflict group. When priority is significant and varies across different groups, ensure your conflict groups are in the desired order.

To demonstrate, in the example below, if Jobs 2 and 3 are ready for execution, the configuration below will cause Job 3 to be executed first since it is found in the first conflict group. If the conflict groups were saved in the reverse order, Job 2 would be executed first. In addition, if Job 1 were also available for execution in the example below, it would prevent Job 3 from executing, which would result in Job 2 running simultaneously with Job 1. 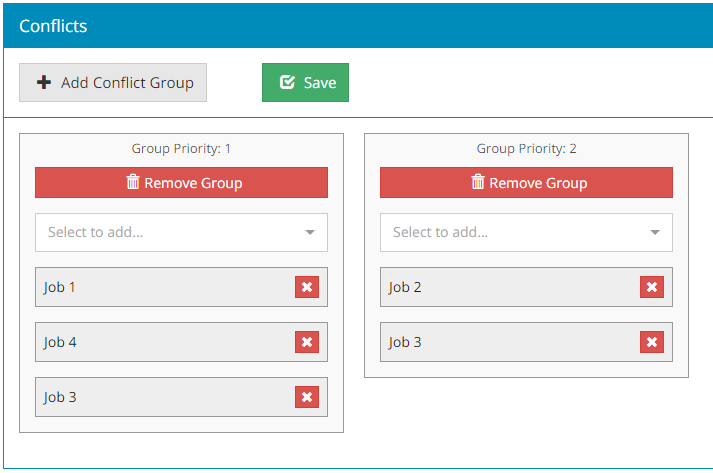